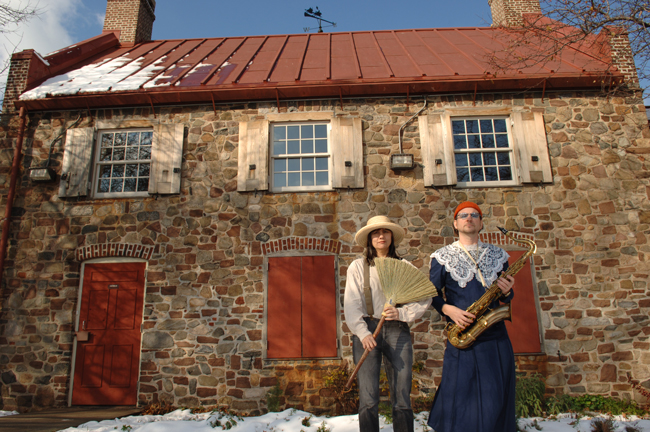 Little (i) Music is a Brooklyn-based record label founded by saxophonist Jeff Lederer, which produces creative music in the jazz and improvised music fields. The catalogue focuses on the work of Jeff Lederer and Mary LaRose and their projects, including Shakers n’ Bakers, Swing N’ Dix, the Honey Ear Trio, Sunwatcher Quartet, and Brooklyn Blowhards.

Jeff Lederer is a Saxophonist/clarinetist/composer who has been included in the Downbeat Critics’ and Readers’ poll each year since 2014. He leads ensembles including the “Shakers n’ Bakers”, “Sunwatcher Quartet” and “Brooklyn Blowhards” and is the founder and director of the Visionary Youth Orchestra. Mr. Lederer also plays in the groups of Matt Wilson, Bobby Sanabria, Allison Miller, Jimmy Bosch and many others. Lederer was named as a “Musician to Watch in 2017” by JazzWise magazine in London and has appeared in the North Sea, Molde, Monterey, Chicago, Earshot Seattle, Azores and Guimaraes Jazz festivals where he was the 2017 artist-in-residence. Lederer is currently serving as Director of Jazz Studies and professor of Jazz Saxophone at Long Island University.

Jeff’s cross-stylistic composition/arranging projects include “Los Sazones”, a salsa reimaginng of Vivaldi’s “Four Seasons” which was commissioned by the Ravinia Festival for the Chicago Symphony and has been performed by many major orchestras including the Los Angeles Philharmonic at the Hollywood Bowl.

As an educator, Jeff is currently Director of Jazz Studies and MTEP (Music Technology, Entrepreneurship and Production) at Long Island University Post Campus. Jeff has worked with Jazz At Lincoln Center Education programs, and is the founder of the Visionary Youth Orchestra for the Vision Festival. He has taught workshops and residencies in jazz and saxophone at the University of Miami, New England Conservatory, Dartmouth College, SUNY Binghamton, University of Northern Iowa and many other leading jazz departments.

The Bandwagon Summer Series is a family-friendly outdoor cultural performance series running from early May through mid-October. More than 20 performances ranging from a diverse group of musical styles, circus arts, dance, and theater will take place at ballfields, farms, and parks throughout Windham County. Kids under 12 always get in for free, and a dedicated play area will be available at all shows. Refreshments are sold onsite, including the return of last summer’s hugely popular Barr Hill cocktails, and the new addition of some selections from Mad River Distillers.